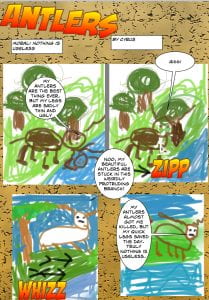 The wisdom tale that I chose was called Antlers.

Antlers is one of Aesop’s fables. Antlers is a story displaying that nothing is useless. The main character is a deer that loves his beautiful antlers. But those antlers end up almost getting him killed, but his ugly legs save him. Showing him that truly nothing is useless. While I could have chose many stories that show this message, I chose Antlers as it has the most fun, concise and interesting way of displaying that message. The way that I made a project out of this story, is I made drawings in Sketchbook, I then put them in ComicLife3 to make a comic out of the story. 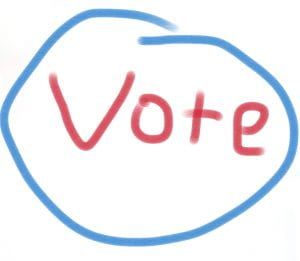 The 2022 senate elections are very close. The Democratic party currently controls a paper-thin majority of 51-50 with a tiebreaker. They were seen as likely to keep this majority in late summer as anger over abortion fumed, but the Republican party was surging ahead of election day with an increasing focus on crime. But those two opposing forces have made this race for a majority a tossup.

These are the 7 main swing races, the party that gets a majority of the 7 is very likely to get a senate majority.

Arizona: Incumbent Democratic senator Mark Kelly was predicted to have a 73% chance of defeating his opponent,  Republican Blake Masters.This was a good campaign for Mr.Kelly, despite this being a midterm election which is usually unfavorable for congress members of the president’s party and the fact that Katie Hobbs, the democrat candidate for governor wasn’t polling very well. The race is looking like a democratic victory, but the race has not been called yet.

Georgia: Incumbent senator Democrat Raphael Warnock had a 47% chance of retaining his seat against Republican Herchel Walker. This race has been filled with the candidates not arguing over policy, but over each other’s questionable personal lives. The result was a runoff to occur on December 6th. A runoff occurs in most southern states when no candidate reaches 50%. No candidate was able to do that, as the libertarian candidate got 2.1% and neither Walker(48.3%), nor Warnock(49.6%) reached 50%.

Nevada: This race had incumbent Catherine Cortez-Masto in an uphill battle to defend her seat against former attorney general Adam Laxalt. This race was seen as the greatest Republican opportunity to flip a seat. Harry Reid who had made a large democratic turnout machine was gone. The Culinary Workers union was weakened because of mass layoffs.This race was one of the last races to be called and the result is not known yet, but Adam Laxalt has a very slight lead.

New Hampshire: Incumbent Democrat Maggie Hassan who won her seat by a minuscule 1,000 votes 6 years ago ran for reelection against Don Bolduc, a far-right candidate. He was a weak candidate for a seat the republican party had high hopes for flipping. In the late summer this race was considered as an overwhelmingly democrat-leaning race but in the fall Republican surge, this became a fairly close race. But in the end, Maggie Hassan had a large victory of 10% to retain her seat in the senate.

North Carolina: Ted Budd was predicted to have a 81% chance to keep a North Carolina senate seat for Republicans as Sen. Richard Burr retired. His challenger was former state Supreme Court head justice Cheri Beasley. Ted Budd won, but Cheri Beasley was very close, following a larger North Carolina trend of republicans winning, but usually without comfortable margins.While Democrats were hopeful that they would get this seat, them losing wasn’t a major setback.

His challenger, John Fetterman was trying to change that with an emphasis on working-class voters. This race many considered to be the closest race in the whole senate. The result was a fairly large victory for John Fetterman. This race had big questions about both being able to effectively represent Pennsylvania. John Fetterman had a major stroke in May, and his performance at the senatorial debate only amplified those fears, bringing his chances from fairly high, to toss up.

On the flip side, Dr.Oz only moved to Pennsylvania in 2020, and many accused him of carpetbagging.

Wisconsin: Senator Ron Johnson was predicted to have an 83% chance of defending his seat vs. lieutenant governor Mandela Barnes, but this ( behind Pennsylvania) was seen as the 2nd most likely Democratic pickup. This race was a nail-biter, but Ron Johnson  came out on top with a margin of roughly 1%. This was the 4th last race to be called.

The overall senate result was: Well, we don’t know yet. The Georgia race is going to runoff, so results may not fully come in until December. But so far, the split in the 7 races is 2-2.

The 435 separate house races in the United States of America hinged on a few swing races, the latest redistricting made maps more fair, but restricted the swing races to only a few. Republicans were favored to win this race, but the predicted margin shrunk a lot. Coming into summer, Republicans had hopes of picking up a lead of 50 seats, but as the midterm year went, that hope shrunk. Now, 3 days after election day, the predicted lead for republicans has shrunk to around 10. In this coverage of the house, I will mostly cover why that matters, and not the specific races.

Republican Kevin McCarthy is the likely house majority speaker. But the midterm elections threw a jam in that possibility. The small lead has caused major problems for him, the house freedom caucus, a group of far-right congressmen and women are asking McCarthy to move to the far-right if he wants there vote for speaker.

This, ironically, has Democrats giving Far-right republicans MUCH more power.

Another strange thing going on in the house are races like the Montana 1st, Colorado 3rd, or many suburban districts in New York are close, or even flipped. And districts like those are traditionally partisan districts that were not expected to be close.

For example, the Colorado 3rd district was listed as a very very likely win for Rep. Lauren Boebert, but it is one of the closest districts in the country. This made the house very hard to predict this year.

As of right now, republicans have been called in 211 races, but Democrats are right behind them at 198. The control of the house rests on who can get to 218 first. As of right now, Democrats    are behind, but they have over performed in the other races, so they cannot be counted out yet.

In the 2022 midterm elections, 36 states chose their governor.

This was a crazy year for governor races.

Some had Republicans being competitive in states like New York, or Oregon, and some had democrats winning Oklahoma. But overall, (at least so far) only two states have flipped, and those states were both republican-held in blue states. As of right now, 3 races are still up for grabs, Alaska, Nevada, and Arizona. But a notable trend I think, is democrats keeping their states that they gained in the blue wave of 2018. Such as Kansas, were kept by democrats. So overall, Democrats over performed.

I think the main explanation for this has been Donald Trump’s major influence on the republican party’s candidates. Many of the candidates he has chosen  have lost, and even candidates he did not directly endorse tended to have more far-right views because of his effect on the Republican party.

While usually an obscure position, the secretary of state has increased tracking this year, following Donald Trump’s claims of voter fraud. The secretary of state certifies results of elections, so in key swing states like Nevada, or Arizona, or Georgia, it matters who is in that position. Here are the results.

Georgia: despite HEAVY from Donald Trump, Secretary of state Raffensperger wins fairly easily. Raffensberger denied Trump when he asked to get the results in the Georgia presidential result overturned.

Hopefully this guide has showed you the trends, patterns, and wins of the midterms of 2022.

I was bursting with anticipation , for the first time I was going on an overnight field trip.Getting on the bus, I was bracing for a long, exasperating bus ride, but I was still excited. My guess of a long, excruciating bus ride was off. The bus ride included a movie, an excellent view, and students loudly singing.As we got to Camp Hanes, I took a deep breath of fresh mountain air.

After we all got settled in our cabins, we did activities such as archery, canoeing, and rock climbing. Rock climbing was my personal favorite. At rock climbing we did many things, one was as might be expected, climbing vertically up a wall.There were other things though, there was a sky-hammock that could be reached by a group of rock-climbing-panels, and could be descended from with some tree branches that could be climbed with.

Camp Hanes was an extremely fun experience that was interrupted by the menace of  Hurricane Ian. But overall, the camp was quite fun.On the ride back from Camp Hanes, the movie Ratatouille was on, I enjoyed that, as Ratatouille is one of my favorite movies. After we got back, we had an assortment of fun activities to do, fun but not as fun as hiking at Camp Hanes would have been. At dismissal, it was very rainy and ugly outside, but that didn’t stop me from excitedly running to my mom’s car and telling her all about this experience. I loved Camp Hanes because it was one of the most fun, engaging field trips I’ve ever taken.

In the book Finding Someplace, Reesie, the main character, must stow her things in a backpack to avoid Hurricane Katrina. This raises the question, did she bring the best tangible objects possible? She brought many technologies, Including a phone and a Document of insurance information. I would say she brought some good resources. Here is what I would have brought if I were in this situation.

As far as food, I would mostly use packaged food like instant oatmeal or cereal. They are both calorie-heavy, and can survive a while without going bad. Next, I would pack a few survival objects, such as a hand-crank flashlight to see where I am going without necessarily needing electricity. Also, a knife and blanket in case of disaster, like a tree falling near me. These are the necessary resources to bring.

I would fill up the rest with items not essential for survival. For example, insurance papers in case something happens to any non-packed belongings of mine, and a phone or radio for communication after I have (hopefully) reached safety.This is what I would bring, but this differs extremely from situation to situation.In conclusion, I would only really bring what I need, not want.

Welcome to your brand new blog!

This is a sidebar and can be changed in Widgets in your dashboard.

You can also modify number of sidebars in theme options!

No comments to show.